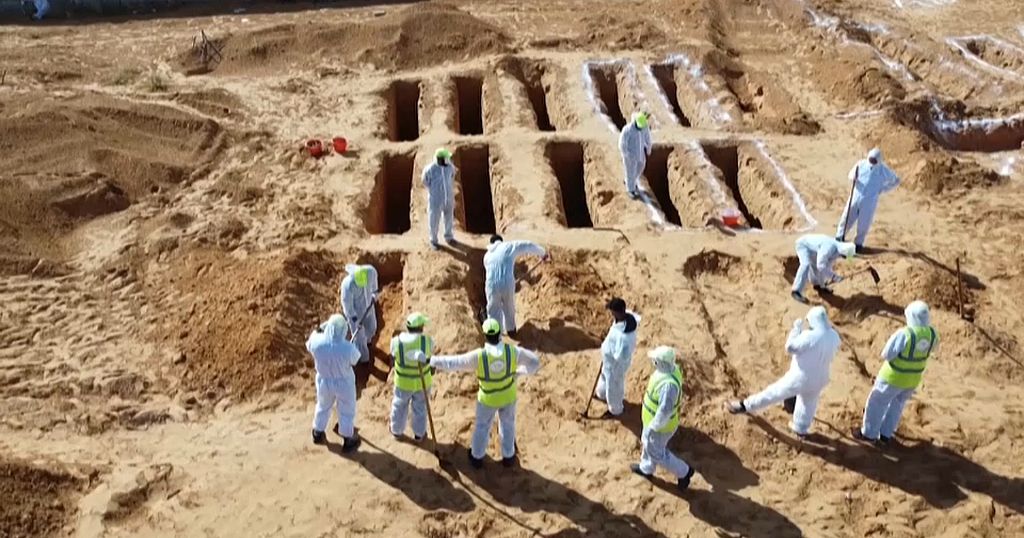 Human Rights Watch said Thursday it called on the government of national unity (GNA) in Libya to investigate the disappearance of hundreds of residents of the town of Tarhouna, where several mass graves have been discovered since the summer.

The city, located 80 kilometers from the Libyan capital, suddenly emerged from anonymity in June after the discovery of mass graves, which “horrified” the United Nations.

Some 120 bodies have been removed from the 27 mass graves identified at this point, HRW said on its website, asking the GNA to investigate “what happened to the missing residents.”

The first discovery came the day after the departure of the forces of Marshal Khalifa Haftar, a strongman from eastern Libya, who has tried in vain since April 2019 to conquer Tripoli, where the UN-recognized GNA sits.

The city has since been under the control of pro-government forces.

“At least 338 residents of Tarhouna were reported missing after the local Al-Kani militia, known as Kaniyat, took control of the town in 2015,” the NGO said Thursday, referring to the authority responsible for exhuming bodies.

Residents told the NGO that the militia, allied with Khalifa Haftar, “kidnapped, detained, tortured, killed and often disappeared people who opposed or were suspected of doing so.

Libyan authorities told HRW they had yet to identify the bodies found in mass graves.

They should “take appropriate steps to identify the bodies and bring those responsible for the abuses to justice,” said Hanan Salah, HRW Libya researcher.

The Kaniyat militia and its leader Mohamed al-Kani were punished in November by US authorities for “torturing and killing civilians during a cruel campaign of oppression in Libya.”

These sanctions involve the freezing of their assets in the United States and the prohibition of transactions with them within the American banking system.

Libya has been steeped in violence since the NATO-backed uprising that overthrew Muammar Gadhafi’s regime in 2011.

The GNA, supported by Turkey, and Marshal Haftar, supported in particular by the United Arab Emirates and Russia, signed a ceasefire agreement in October.

In November, Libyan officials from all sides agreed to hold national elections in December 2021.